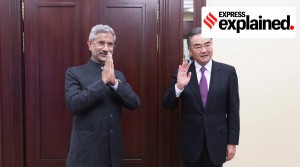 The Indian Express speaks to Maj Gen Prof G G Dwivedi (retd), who has commanded troops in this sector and served as Defence Attaché in China, to put the India-China talks in perspective.

The Foreign Ministers of India and China, Subrahmanyam Jaishankar and Wang Yi, arrived at a ‘Five Points’ agreement to reduce the prevailing tension on the Ladakh border during their talks in Moscow on the sidelines of the SCO Summit on September 10. The Indian Express speaks to Maj Gen Prof G G Dwivedi (retd), who has commanded troops in this sector and served as Defence Attaché in China, to put these talks in perspective.

How significant were the India-China talks?

The process of dialogue between the nations is vital especially when the two are neighbours with strained relations. This meeting between the two foreign ministers was an attempt to break the state of impasse as series of talks have taken place at multiple levels without yielding any results. It was also good optics especially for China as the Communist leadership was keen to showcase its sincerity to resolve the issues through dialogue.

It is in keeping with the Chinese policy of ‘talking and fighting simultaneously’ (yi bian dan-yi bian da). Besides, it also lent credence to the role of Moscow in setting up the stage for the talks. Some experts have termed these talks as stepping back from the brink of war which it is not. The current situation is well below the threshold of conflict if we talk of the escalatory ladder.

Can you briefly explain the escalation and de-escalation matrix?

The genesis of the current stand-off was the aggression undertaken by the PLA in the form of incursions by the People’s Liberation Army (PLA). Given the scale, extent and timing, the operation was well planned at the highest level i.e. Central Military Commission (CMC) headed by President Xi Jinping as its Chairman.

While the political intent was to give a strong message to Delhi to kowtow Beijing’s interest, the military aim was to make quick territorial gains in the Depsang, Galwan and Pangong Tso area. This marked the first step in the escalatory ladder, which almost went as planned for China. Indian Army’s swift mirror deployment took escalation to the next level.

A bloody skirmish at Galwan on June 15 and rapid build-up on both sides led to steep escalation in which 40,000 PLA soldiers stand deployed with almost an equal number on the Indian side. However, the situation remained regulated by talks at the military-diplomatic and political levels. India’s counteraction at Chushul by way of the occupation of Kailash Range on August 29-30 took the escalation to a higher level, but well below the threshold of conflict.

The de-escalation process starts with gradual disengagement of troops alongside the dismantling of war-waging infrastructure, pulling back, and finally withdrawal to the designated locations.

What is the significance of the India-China five-point Action Plan?

It reiterates the process of dialogue, disengagement, and easing of the situation. All this was comprehensively dealt with in the previous five agreements given below:

• The 1993 ‘Maintenance of Peace and Tranquility Agreement’ forms the basis of all followup agreements.

• 1996 ‘Confidence Building Measures’ denounced the use of force

• 2012 ‘Process of Consultation and Cooperation’

• 2013 ‘Border Cooperation Agreement’, signed as a sequel to Depsang intrusion by PLA

There is no requirement of additional agreements. The moot point is their implementation as these have been violated by the PLA in pursuit of its “Nibble and Negotiate” strategy. In fact, all these agreements have only helped China to consolidate its claims over a period of time by waging a ‘bullet-less’ war.

The mechanism of strategic guidance evolved at Wuhan and later reconfirmed at Mamallapuram between PM Narendra Modi and President Xi Jinping has not delivered despite the fact that Xi is the commander-in-chief of PLA.

What should be India’s future strategy?

China has not been able to achieve its aims either politically or militarily due to India’s firm and resolute response. This will definitely reflect upon Xi Jinping’s iron man image. It is worth noting that Xi would like to add to his achievements that can be flaunted during the centenary celebrations of the Communist Party of China (COC) in 2021, and the 20th party congress, a crucial five-yearly Communist party event due in 2022.

The force level deployed by China in Aksai Chin with two strike divisions (4 Motorised Division in the Chushul sector and 6 Mechanized Division in Depsang) and 150 frontline fighter aircraft positioned on the forward bases belies Chinese intent to de-escalate. Therefore, India must continue its proactive posture not only in Ladakh but across the complete length of LAC. After all, it’s the position on the ground which will decide the trajectory of talks on the negotiations table. Above all, we must insist on April 2020 status quo and make it clear to the Chinese that the border issue cannot be delinked from bilateral relations.