To comprehend the aggressive behaviour of the Communist leadership, it is important to understand the symbiotic relationship between these two entities, and the nature of the generational transformation in the Chinese military. 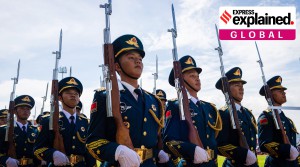 It is customary for a nation to have an army but extremely rare for a political party to have one. China’s People’s Liberation Army (PLA) is an exception, as it owes allegiance to the Communist Party of China (CPC).

This exclusive arrangement was formalised in December 1929 during the Ninth Meeting of the CPC at Gutian in Fujian province where Mao Zedong, while addressing the men of the Fourth Army, clarified the role of the military: it was “to chiefly serve the political ends”, Mao said.

Here on, absolute control of the Communist Party over the army became entrenched. Interestingly, 85 years later, on December 30, 2014. President Xi Jinping during his address to ‘Military Political Work Conference’ at Gutian, reiterated that the “PLA remains the Party’s army, and must maintain absolute loyalty to political masters”.

The two most powerful organs in the Chinese system, crucial for the survival of the authoritarian regime, are the CPC and the PLA. To comprehend the aggressive behaviour of the Communist leadership, it is important to understand the symbiotic relationship between these two entities, and the nature of the generational transformation in the Chinese military.

The PLA: Birth, structure, evolution, and its symbiotic relationship with the Communist Party

The PLA traces its roots to the ‘Nanchang Uprising’ of August 1, 1927, the day the Communists led by stalwarts like Mao, Zhou Enlai and Zhu De rose against the nationalist forces. It played a key role in the successful culmination of the Communist revolution in 1949, and of the CPC coming to power. The PLA’s iconic commanders, Mao and Deng Xiaoping, led the People’s Republic of China (PRC) for almost a half century as its first and second generation leaders.

Given its symbiotic relationship with the CPC, the PLA is well represented in the two apex governing bodies – in the Politburo, the PLA has 2 members out of 25, and in the Central Committee, the PLA accounts for 18-20 per cent of the 205 permanent and 171 alternate members.

The Central Committee elects the Politburo and the Politburo Standing Committee (PSC), the highest political body that is currently composed of seven members. Until 1997, the PLA had representation in the PSC as well; General Liu Huaqing was the last general to hold that position. 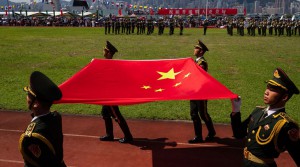 Members of the People’s Liberation Army (PLA) march with a Chinese flag during a flag raising ceremony at an open day at the Ngong Shuen Chau Barracks in Hong Kong, China, on Sunday, June 30, 2019. (Bloomberg Photo: Eduardo Leal)

The Central Military Commission (CMC), the highest military body, is composed of the PLA top brass, appointed by the PSC. The chairman of the CMC is the Commander-in-Chief (C-in-C) of the PLA, usually the Secretary General of the CPC, and presently President Xi.

Senior PLA officers are invariably members of the CPC. While commanders handle operational and training aspects, Political Commissars are responsible for personal matters, propaganda and indoctrination to establish the Party’s authority over the PLA.

Barely a year after its creation, China jumped into the Korean War in 1950 to take on the United States. Fighting the adversary to a stalemate, the PLA suffered over half a million casualties, including Mao’s son Capt Anying.

In 1962, it defeated the Indian Army in a limited conflict. However, the PLA performed poorly against the Vietnamese Army in 1979. As a sequel to introspection, it went through a sustained restructuring and modernisation process.

In 1993, President Jiang Zemin, upon observing US military power on display in the 1991 Gulf War, directed the PLA to prepare for “local wars under modern conditions”. This paved the way for the initiation of major doctrinal reforms in the Chinese military. In 2004, President Hu Jintao laid down the revised mandate for the PLA: “To win local wars under informationised conditions”.

The PLA’s march towards modernisation: plan, timelines, goals and strategy

On assuming power as China’s ‘Fifth Generation’ leader in 2012, President Xi laid down his China Dream (Chong Meng): a “powerful and prosperous” PRC that would acquire “great power status by 2049”. In Xi’s vision, military reforms were critical to realise the ‘China Dream’, besides achieving key national objectives, namely: stability – unchallenged authority of the CPC; modernity – sustained economic progress; and sovereignty – integration of claimed territories with the motherland.

The strategic directions for military modernisation have been spelt out in the ‘White Papers on National Defence’. The 2015 White Paper focussed on the strategy of ‘Active Defence’, and that of 2019 delved on ‘Defence in the New Era’.

The timelines laid down to achieve the stated goals are: mechanisation by 2020, basic modernisation including informationisation by 2035, and transformation into a world class military force by the middle of the century.

The main thrust of military reforms has been on revamping systems and structures across the board. At the macro level, the focus was on civil-military integration, jointness, and optimisation.

The CMC is now responsible for policy formulation, controlling all the military assets and higher direction of war through 15 offices and departments. Three additional Headquarters, namely the Ground Forces, Rocket Force, and Strategic Force, were created to ensure centralised control of these assets at the highest level.

The national flag of China. The ongoing reforms in the PLA are aligned with Xi’s grand projects. (Bloomberg Photo)

In the new command structure, the President as the C-in-C exercises direct operational control over the PLA.

The salient facets of China’s ways of war fighting are:

At the operational level, the erstwhile 17-odd Army, Air Force, and Naval commands have been organised into five ‘Theatre Commands’ (TCs) – Eastern, Western, Central, Northern, and Southern. While the Eastern TC is responsible for the Taiwan Strait, the Western TC looks after the entire Indian border. Putting all the war fighting resources in each TC under one commander ensures seamless synergy and optimisation.

In addition, 84 corps size formations have been created, which include 13 operational corps and airborne corps, besides dedicated training facilities and logistics installations in each theatre.

While the PLA is reasonably well equipped, it lacks combat experience. To overcome this handicap, it trains under realistic conditions in well-organized combined training facilities. To support capacity building, adequate budgetary support has been provided. The official defence budget for the year 2020 was $179 billion (actual figures being much higher). However, its revenue expenditure is gradually rising due to the huge maintenance cost and provisioning for over 50 million veterans.

After claiming victory over the novel coronavirus in April this year, Xi has gone on the overdrive to consolidate his position at home and to project a strongman image abroad, through aggressive posturing by the PLA around the disputed territories in the South China Sea, and against India in Ladakh. It is part of Xi’s campaign to set the stage for the 20th Party Congress due in 2022, during which there will be a reshuffle in the leadership.

PLA’s Western Theatre Command, which has been engaging with the Indian Army

PLA’s aggression in Eastern Ladakh during May this year was well planned. Beijing’s strategic aim apparently was to convey a strong message to New Delhi to kowtow to China’s interests, and to desist from building border infrastructure so as to maintain the status quo.

In tactical terms, its twin objectives were to make territorial gains in the contested areas, and to seek to shift the Line of Actual Control (LAC) westward.

These operations have been undertaken by the PLA’s Western Theatre Command (WTC), the most expansive of the five TCs, which has responsibility for Tibet and the restive Xinjiang region. Gen Zhao Zongqi, Commander, and Gen Wu She Zhou, Political Commissar of the WTC, are handpicked for the job. 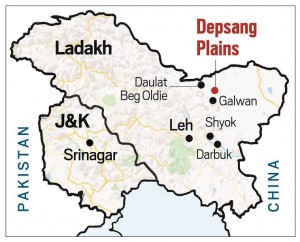 Both the Commander and the Political Commissar are members of the Central Committee of the CPC. While Zhao is a 1979 Vietnam War veteran who has commanded brigade and corps in this area, Wu is a rising star.

The major formations under the WTC are the South Xinjiang Military Region (SXMR) and the Tibet Military Region (TMR), both of corps size, 76 & 77 Corps; six air force divisions; the rocket force base in Qinghai; and the ‘joint logistics support centre’ at Xining. Its “combined arms tactical training base” (CATTB) is at Xichang-Qingtongxia.

SXMR under Maj Gen Liu Lin, who has considerable experience in the area, undertook the incursions with clear objectives:

* Depsang Plateau: posture to pose a threat to Siachen and enhance security of the Western Highway.

Although the PLA gained an initial advantage, it did not expect the stiff resistance from the Indian Army. Given the PLA’s intent to hold on to the gains, coupled with the current levels of build-up by both sides, and with the military level talks yielding little results, the de-escalation process is in for a long haul.

On the eve of the PLA’s 93rd anniversary on August 1, 2020, Xi, while presiding over the ‘group study session’ of the CPC Central Committee, said: “To develop ‘socialism with Chinese characteristics’ and achieve national rejuvenation, efforts to make the country prosperous and making the military strong go hand in hand. Military capabilities must fit the national needs.”

Calling for leapfrogging developments, Xi underscored the implementation of strategic guidelines in the “new era”, including the drawing of a scientific roadmap and cultivating high-calibre military talent.

The ongoing reforms in the PLA are aligned with Xi’s grand projects like the Belt and Road Initiative and the Maritime Silk Route to enlarge China’s global footprint. The impact of the rapid accretion in the war-waging potential of the PLA is already being felt, given its growing aggressive behaviour.

China has ensured that the border issue with India remains unresolved in order to retain the ability to mount tensions on the LAC at will. The current aggression by the PLA in Aksai Chin is part of a grand design with multiple strategic and tactical objectives. The WTC is China’s strategic theatre from the point of internal security, and of working with Pakistan against India.

To effectively cope with the PRC’s repeated misadventures, India needs to reset its China policy to one that is centred on its core interests.

There is need for a realistic articulation of threat assessment, and formulation of long-term strategy to effectively safeguard national sovereignty and integrity. This demands transformational initiatives to restructure apex organisational frameworks to successfully prosecute calibrated responses in the realm of a limited war scenario, through synergised application of war-waging potential.