Ahead of the centenary of the founding of the Communist Party on July 1, 1921, a look at the extraordinary journey of China’s ‘Red Dynasty’ and its new ‘Yellow Emperors’ from Mao to Xi 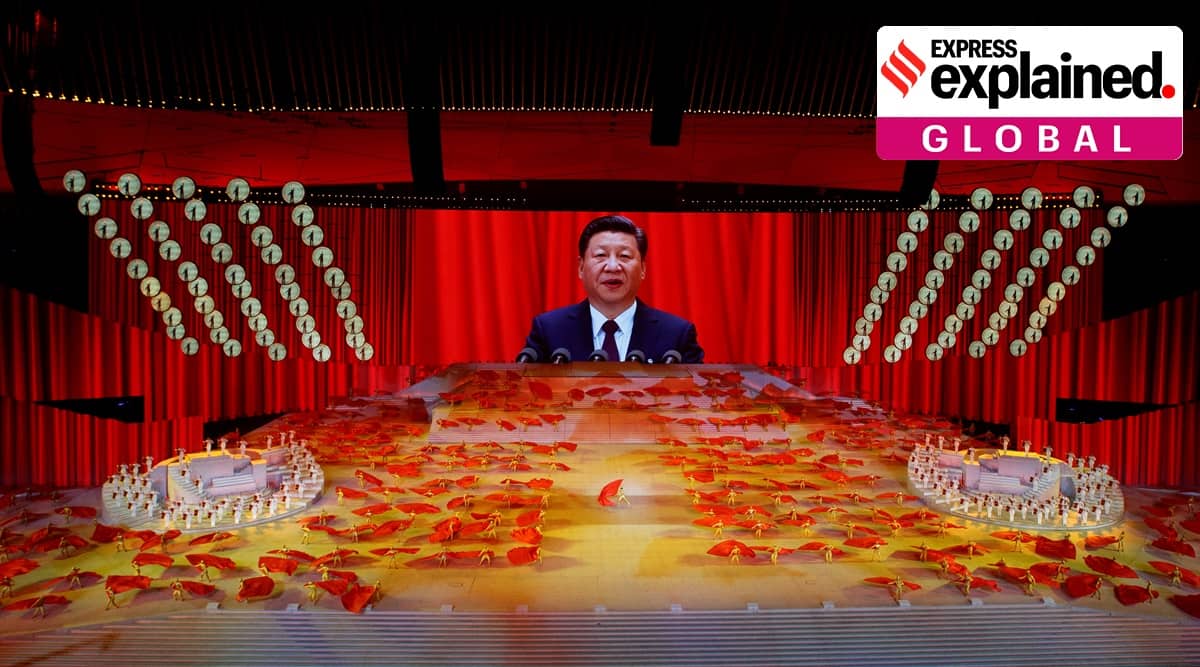 A screen shows Chinese President Xi Jinping during a show commemorating the 100th anniversary of the founding of the Communist Party of China at the National Stadium in Beijing, China June 28, 2021. (Reuters)

As per traditional Chinese belief, it is the ‘mandate of heaven’ (tianming) that gives an individual the right to rule. While a capable ruler would be allowed to govern with a renewed mandate, it could be revoked in the case of a despot. Interestingly, a dynastic bloodline was never the criterion to determine the line of succession.

Since the time the seeds of Chinese civilisation sprouted on the flood plains of the Yellow River (Huang He) almost five millenniums ago, hundreds of rulers have taken the legendary title of the ‘Yellow Emperor’ (Huang Di). The first ruler to claim the ‘mandate of heaven’ was King Wen of Zhou State (1050 BCE), and it was Shi Huangdi of the Qin Dynasty (221-206 BCE) who unified China for the first time.

The new ‘Yellow Emperors’ of China

In the history of contemporary China, few have wielded more power than Mao Zedong, Deng Xiaoping and Xi Jinping; the modern ‘Yellow Emperors’ of the ‘Red Dynasty’, the Communist Party of China (CPC). Of the 13 dynasties that ruled China, only eight lasted in power for longer than 100 years. The CPC is, therefore, justified in celebrating its centenary with a grand ceremony.

The CPC was founded on July 1, 1921 in Shanghai by the intellectuals, Chen Duxiu, who was popularly referred to as “China’s Lenin”, and Li Dachao. The Party traces its origins to the May Fourth Movement; an anti-feudal political movement that grew out of student protests.

The Red Army came into being on August 1, 1927, in the wake of the Nanchang Autumn Harvest Uprising, when workers and peasants led by Mao Zedong and Zhou Enlai revolted against the nationalist forces (Kuomintang- KMT). Mao was appointed commander-in-chief of the Red Army.

In December 1929, during the Ninth Meeting of the 4th Red Army at Gutian, Mao clarified that the role of the military was “to chiefly serve the political ends”. Thus, absolute control of the Party over the Army became entrenched.

Mao became Chairman of the CPC in 1945. After defeating the KMT in the Civil War (1945-49), he proclaimed the establishment of the People’s Republic of China on October 1, 1949. Mao emerged as China’s paramount leader, and his ideology, ‘Mao Zedong Thought’, was encapsulated in the famous Red Book and enshrined in the Party’s constitution. Mao believed in class struggle, and was convinced that China had to be transformed by mobilising the masses.

Mao collectivised agricultural production by creating communes. The ideological assumption that China could emerge as an industrial nation based on the sheer grit of its people made him undertake the Great Leap Forward (1958-61), which had a disastrous outcome, with over 30 million people perishing in a horrific famine.

In 1962, Mao launched the Social Education Movement to infuse a new revolutionary spirit into the Party and government machinery. The Cultural Revolution followed in 1966 to stamp out corruption, elitism, and bureaucratisation. It was marked by extensive repression and intense violence, and the ‘revolution’ ended with Mao’s death on September 9, 1976.

Mao was the most influential and controversial figure who left behind a mixed legacy. Lauded for restoring national sovereignty after the successful Communist Revolution, he initiated major industrial reforms, and improved the status of women. Yet, Mao’s era was characterised by staunch ideological dogma that brought intense misery to the Chinese people.

Post Mao’s death, Deng assumed the reins as the ‘Second Generation’ leader in 1978 after a brief power struggle. He initiated the process of “reforms and opening up” (gaige gaifang), a clear departure from Mao’s ideology. The crux of Deng’s reforms was the ‘Four Modernizations’ programme, encompassing agriculture, industry, science and technology and defence. Deng adopted an ‘open door policy’ coupled with capitalist reforms, which attracted huge foreign investments in the manufacturing sector, transforming China into the factory of the world, and leading to years of very high rates of economic growth.

While Deng emerged as the architect of modern China, he came under intense criticism for the military crackdown on the Tiananmen protests in 1989. He played a key role in the return of Hong Kong and Macau to Chinese control. The ‘Deng Xiaoping Theory’ of “socialist market economy” was enshrined in the CPC’s constitution. Deng fixed the tenure of the Presidency to two terms to ensure a smooth transition from one generation to the other. He died on February 19, 1997, marking the end of the ‘Second Generation’ leadership.

After Deng’s demise, Jiang Zemin assumed the mantle of ‘Third Generation’ leadership, continuing largely with the policies enunciated by Deng. He adopted a “collective leadership” approach and was the architect of the ‘three represent’ (san ge daibiao) thought. It defined the role of CPC: to represent China’s advanced productive forces, orientation of the nation’s culture, and the fundamental interest of the majority of Chinese people. These were incorporated in the Chinese constitution in 2002.

During Jiang’s period, China experienced significant economic growth due to the continuation of economic reforms. Jiang passed the baton to Hu Jintao in 2002. At the age of 94, Jiang Zemin is the oldest living Paramount Communist leader.

Hu, who represented the ‘Fourth Generation’ of the CPC leadership, continued to follow the policies of his predecessor. He professed two main ideological concepts: “Scientific Outlook on Development and Harmonious Social Society”.

On completion of two terms, Hu Jintao handed over the reins to his successor Xi Jinping in 2012. Xi, a dark horse, was the consensus candidate over Li Keqiang, the incumbent Premier, to take on the mantle of the ‘Fifth Generation’ leadership.

Xi bears the tags of ‘Princeling’ and ‘Second Generation Red’, being the son of Xi Zhongxun, a revolutionary. Having joined the Communist Party in 1974 at the age of 21, he progressively moved up the Party hierarchy and burst on the political scene as the graft-fighting Governor of Fujian in 1999.

Given his mild demeanour, it was assumed that Xi would abide by the constitutional rule. However, he played his hand differently, emerging as the most powerful leader after Mao.

Xi set about systematically consolidating his position by strengthening his hold over the twin levers, CPC and PLA. Alongside, he launched an unbridled campaign to clean up the system, resulting in the punishment of more than a million office bearers, including ministers, senior government officials, and military personnel. The anti-corruption drive also proved handy to purge Xi’s political rivals like Bo Xilai.

Since 2013, Xi has initiated pathbreaking military reforms to make the PLA a modern fighting force at par with the Western militaries in the next two decades. The rationale behind the deep-rooted reforms was two-fold: prepare the military for China’s expanding global role, and establish the Party’s firm control over the military in consonance with Mao’s dictum, “Party controls the Gun”.

By reorganizing the Central Military Commission (CMC), Xi appointed himself Commander-in-Chief. At the 19th Party Congress held in 2017, he further strengthened his iron grip over the Party, and a year later went on to discard the two-term Presidency limit, to be life-long incumbent.

“Xi Jinping Thoughts for New Era Socialism with Chinese Characteristics” were enshrined in Communist Party constitution. Xi firmly believes that a return to original Maoism is the only way to save China’s future.

Also in Explained |Explained: Are Chinese Covid-19 shots effective against the Delta variant?

Xi has unveiled his ‘China Dream’ (Zhong Meng), which envisions a “powerful and prosperous” China that is a “great modern socialist country” by the middle of this century. He has referred to China entering a “New Era”, in which Beijing plays a greater role in world affairs, abandoning Deng’s policy of “hide and bide”.

To realise the China Dream, Xi has chosen the geo-economic route. His Belt and Road Initiative (BRI) envisages an investment of $1 trillion, and seeks to enlarge China’s influence across the globe through mega projects, employing chequebook diplomacy. Xi’s model is characterized by an “authoritarian political structure” and “state driven capitalism”.

While the world was fighting the coronavirus pandemic which ironically originated from Wuhan, China, Xi, by employing the strategy of Wei Ji (Crisis and Opportunity), managed to control the spread of the virus and claim victory. In line with his strongman image, Xi has made quick territorial gains in disputed areas including in the South and East China Seas, and the Eastern Ladakh region of India. Internally, Xi has tightened the noose around Hong Kong and Xinjiang, where the Uyghurs are facing intense repression.

During the ‘Two Sessions’ (Lianghui) held in March this year, the Chinese People’s Consultative Conference (CPPCC) approved the 14th Five Year Plan (2021-25), and laid out Xi’s Vision 2035. The major themes include prioritizing the quality of growth, achieving “common prosperity”, elevating China’s leadership role in global governance, and managing the great power rivalry with the United States.

A major overhaul is envisaged in the Chinese economy as it adopts the “dual circulation” system of boosting domestic consumption and creating new demand, and reduces the dependence on shrinking export markets.

Today, China is the world’s second largest economy with a GDP of $14 trillion, has the largest foreign exchange reserves, is the largest trading nation in terms of goods, and has the second largest military — all remarkable achievements for the CPC. Never in its history has China witnessed such prosperity. Even in the wake of the Covid pandemic, the Chinese economy has registered a growth of 18.3 per cent in the first quarter of 2021.

Xi Jinping’s scorecard over the last nine years makes a strong case for seeking a renewed mandate — a ‘Third Term’ — at the 20th Party Congress next year. However, Xi rides the dragon that is externally formidable but internally fragile. He is aware that in case his policies go awry, it could mean an existential crisis both for himself and the CPC.

Xi has gambled on the risky venture of elevating himself to the league of Mao and Deng, although as Princeling he does not belong to the tribe. If he does succeed in leading China into the ‘New Era’, then as per the Chinese 11th century classic ‘The General Mirror for Aid of Government’ (Cu Chi Tang Qian), Xi would qualify to be called an ‘Emperor’.