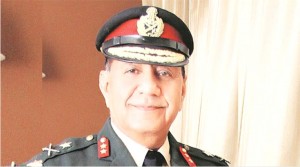 Maj Gen (Dr) G G Dwivedi, who commanded a Jat battalion in this sector in 1992, and was subsequently the defence attaché to China in 1997, told The Indian Express over the phone that he is not surprised by the recent Chinese belligerence.

The peaks around the Galwan valley last saw bloodshed in 1962, when Chinese soldiers opened fire on a company of 5 Jat on October 22, killing 36 soldiers and capturing company commander Major S S Hasabnis. It marked the start of the 1962 war.

“It is part of China’s ‘nibble and negotiate policy’. Their grand aim is to ensure that India does not build infrastructure along the LAC, change the status of Ladakh, cosy up to the US and join the anti-China chorus caused by Covid-19. It is their way of attaining a political goal with military might, while gaining more territory in the process.’’

Dwivedi recounted the time he commanded 16 Jat in Pangong Tso and Hot Springs area in 1992. There was no tension between the two countries at that point. “We used to patrol up till Hot Springs and so did they. The Ladakh Scouts controlled the Galwan valley and did not encounter any problems either. We would learn of Chinese patrols from the red Hong Mei cigarette packets they left behind and graffiti on the rocks that read ‘Chung ko (This is China)’.” Dwivedi said the Indian troops would retaliate by scribbling ‘This is India’ on the rocks.

Things have changed, and Beijing is worried about India’s recent actions of reorganising Jammu and Kashmir and Ladakh and improving infrastructure in the region, Dwivedi said. “It has high stakes in PoK as the $60-billion China Pakistan Economic Corridor (CPEC) traverses through it, and it is also the site of the proposed $9 billion Diamer Bhasha Dam, a joint project of China and Pakistan.’’

He said that China’s current aggressive behaviour also coincides with pressure on President Xi Jinping, who is the chairperson of the Central Military Commission, due to opposition around the globe due to Covid-19 and the economic slowdown at home.

The PLA’s aim, said Dwivedi, is to dominate Durbuk-DBO road, strengthen its position in the Fingers area, halt the construction of link roads in Galwan-Pangong Tso and negotiate de-escalation on its terms.

“They have quietly and steadily built a lot of infrastructure along the LAC, and now they want to dominate the hilltops. Any military man will tell you that this matters because if you don’t occupy the hilltops, you are like a sitting partridge.’’

On the way forward, Dwivedi said India must be firm on restoration of status quo as on April 30. “We must be firm on that, they should go back. We started to disengage but the Chinese did not, they want to consolidate their gains and make us accept the new LAC alignment.”

Negotiations depend on how strong you are on the ground. “Right now, the Chinese have an edge, we must neutralise it. We must either push them back or occupy some other place that affects them.”

Military action, said Dwivedi, should be accompanied by political, diplomatic and economic action. “We must isolate China in the geo-political arena and ensure a consensus in our favour. Last but not the least, let us present a united front as a nation and win the propaganda war as well.”